I arrived back to Asia after a few years of absence from the continent. My first trip left me wanting more, so I was keen on returning. To pile up the expectations, as an avid gamer, a visit to Tokyo including the Tokyo Game Show was the stuff of dreams. I prepared the way that became a routine since – get a guidebook so no local can mistake me for a non-tourist (not like it is very easy for me to blend in in Asia, with green eyes and a permanent stubble…) As the business part of the trip required me to have an interpreter, I got blessed by the companionship of Toru. He was a really nice guy from his emails and even agreed to be my tourist guide on my only sightseeing day at no extra cost. I gladly accepted as I knew I would struggle to cover everything I wanted without local knowledge – and what a decision this was… 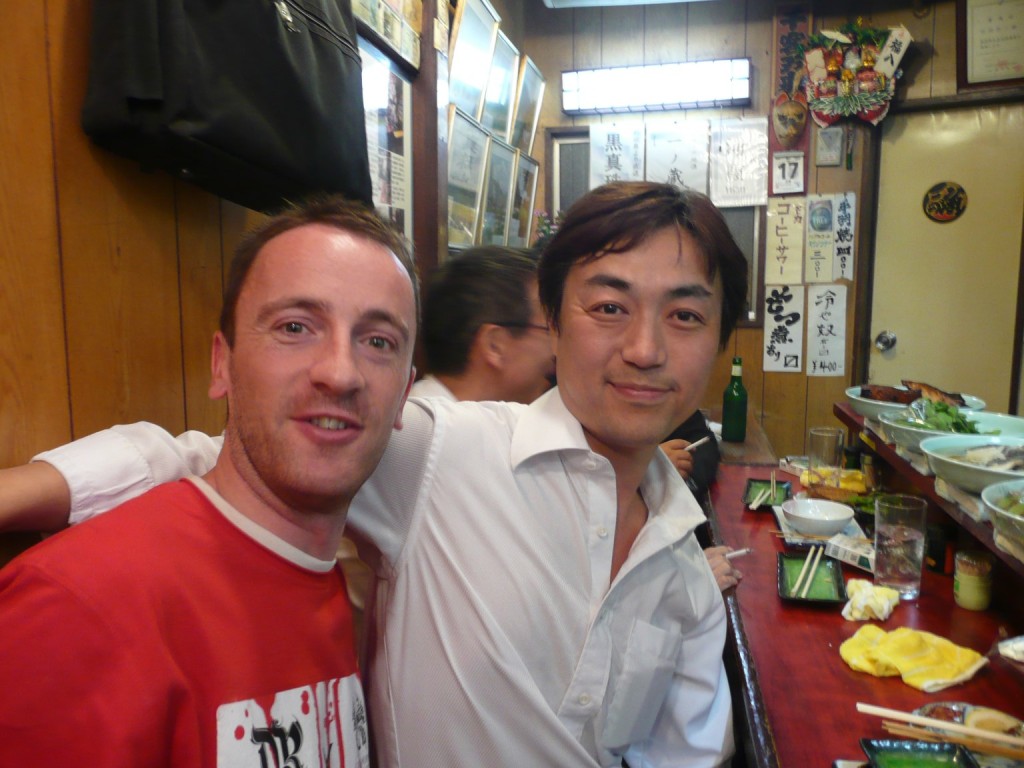 With Toru in the Piss Alley

We met in my hotel lobby right after I arrived on a Saturday afternoon. After we covered the business part, I pulled out my guidebook and started to tell him what I wanted to do on Sunday. I only focused on the highlights section of the book, and the first one was sumo fighting I intended to skip. The next one was “Harajuku girls”, gangs of youth coming together in their cosplay outfits. I thought it would fit in my video game-themed week so I said this could be interesting to see. Then tried to turn to the next page to tell Toru how excited I was about the fish market, or the Senso-Ji temple and Akihabara. He got stuck on the cosplay part though, seemingly suspecting that I have a perversion of watching girls dressed up in various video-game outfits (heck, I went so far that I even found a guide book to back this up) but my cultural background preventing me to say so. He got me wrong, as I wouldn’t have hesitated telling him how important “Cobra Mission” was in my early sex life, we just needed a few more glasses of sake. Ahem. Anyway, he kept on coming back to the cosplay topic, telling me that he will do some research on it during the night and meet me at an early morning hour tomorrow. I certainly failed to move the emphasis away from that theme, but, at this stage, had no idea how spectacular my failure was.

The next morning, after a quick and mind-blowing breakfast in a rolling sushi bar, Toru uncovered his plans to take me to a cosplay festival instead of just a stroll across Jingu-bashi that was suggested by the guidebook. From here on, I quickly lost control of events, so I try to recollect what happened by using photos of the day. 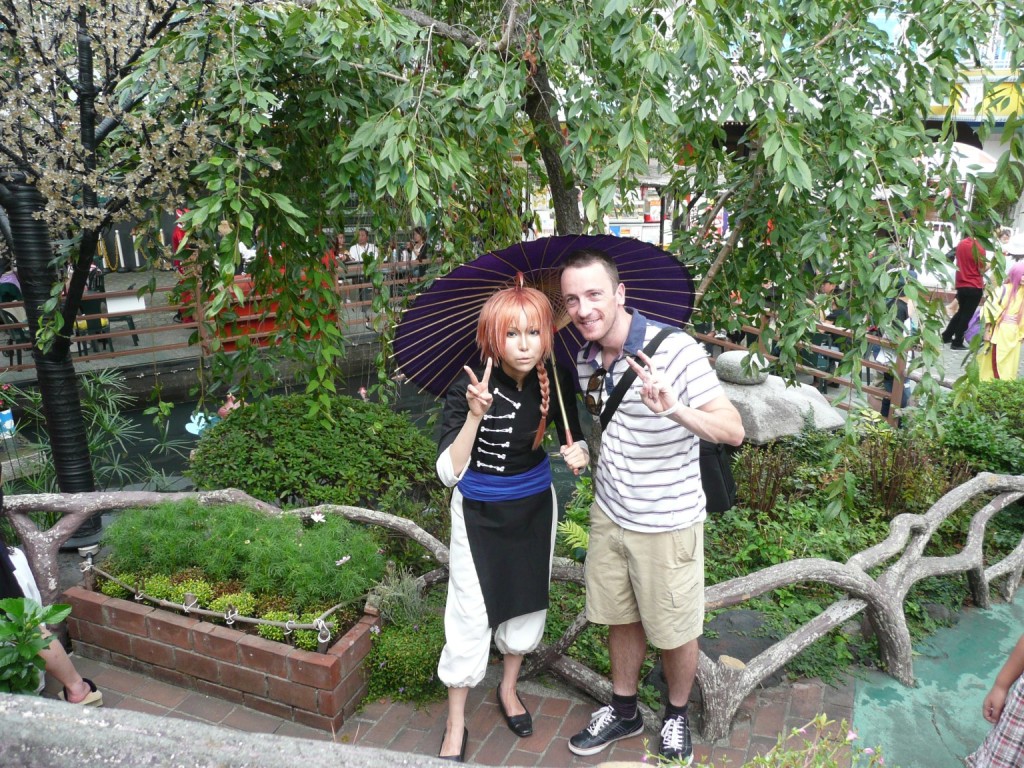 Toru: “Just go to her, I asked already and she doesn’t mind” 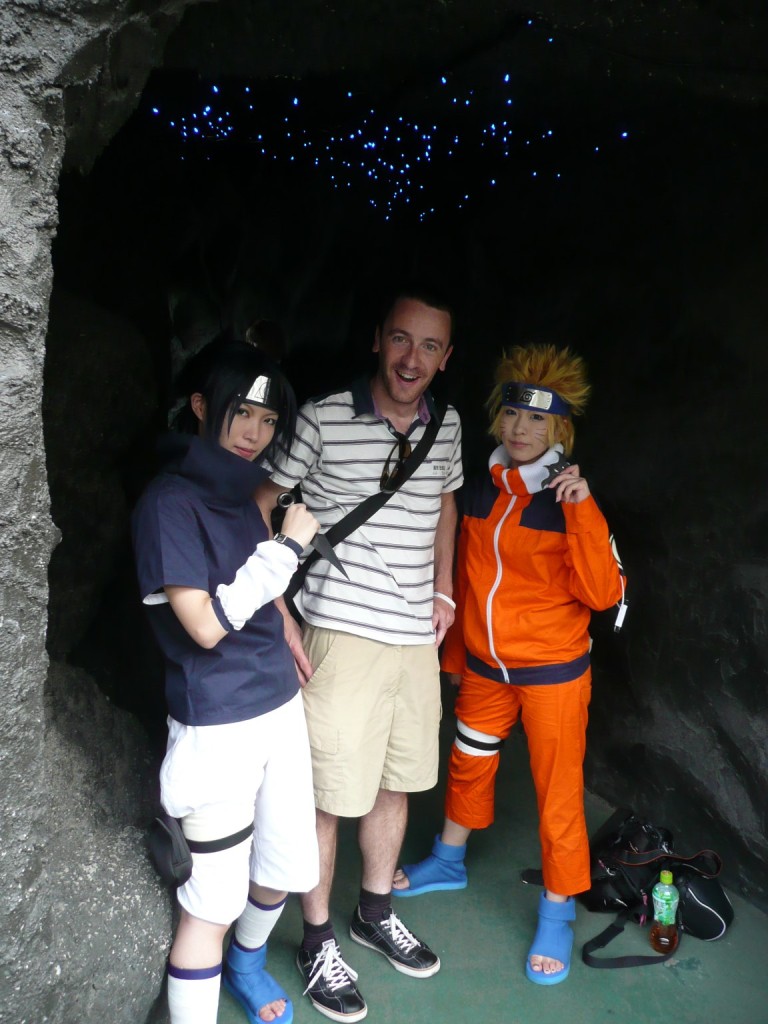 Balazs: ”Toru, you realise that they have mean looking blades in their hands, right?” 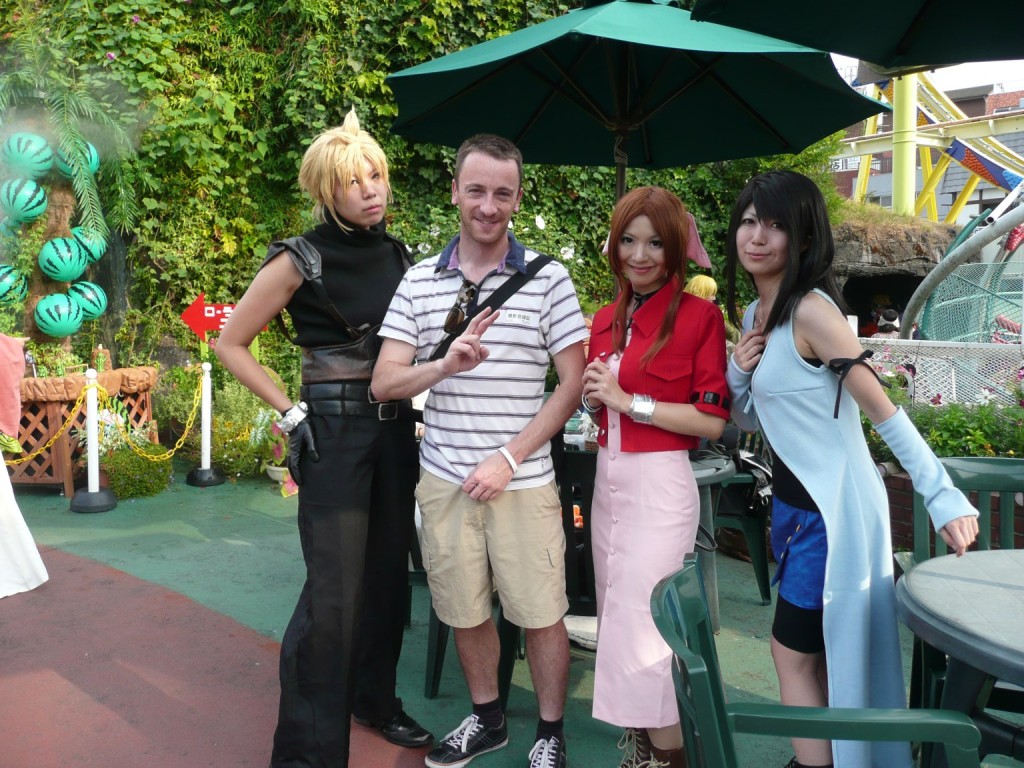 Balazs: “Dunno, I enjoyed the first two-three photos, but after 10 it became less of an excitement” 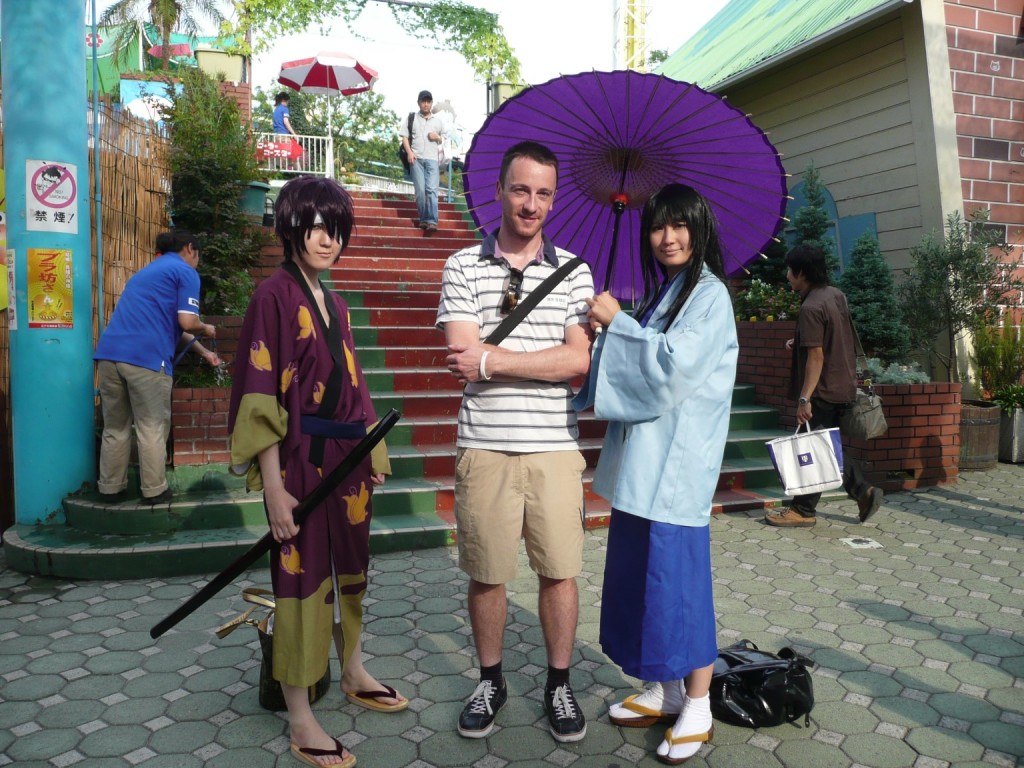 Balazs: “Toru, please promise that this is the last photo that I have to pose for”

After we spent the morning hours here, I started to feel really uncomfortable; half a day is passed and

1) I have no facebook-compatible photos that I can show to friends and family
2) haven’t seen anything of Tokyo.

So I finally managed to get Toru moving, he agreed to go to Akihabara quicker than I thought. When I realised that we are zipping past a temple, I begged him to stop for a photo; I later realised that it was Senso-Ji… 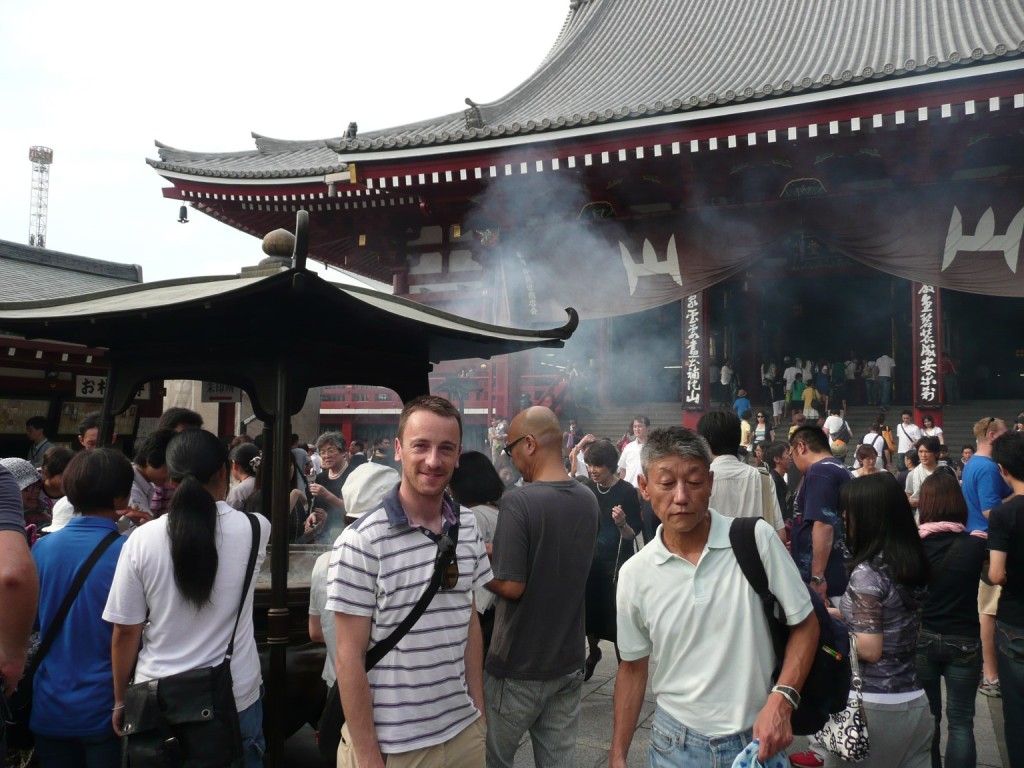 Suchatourist in a touristy place. For a second.

After getting to Akihabara I hoped the day is now on the right track… then after just one corner I found myself cramped in a tiny elevator with Toru and a girl dressed up as a maid smiling at me while she is exchanging business-like speak with Toru in Japanese… Into this building: 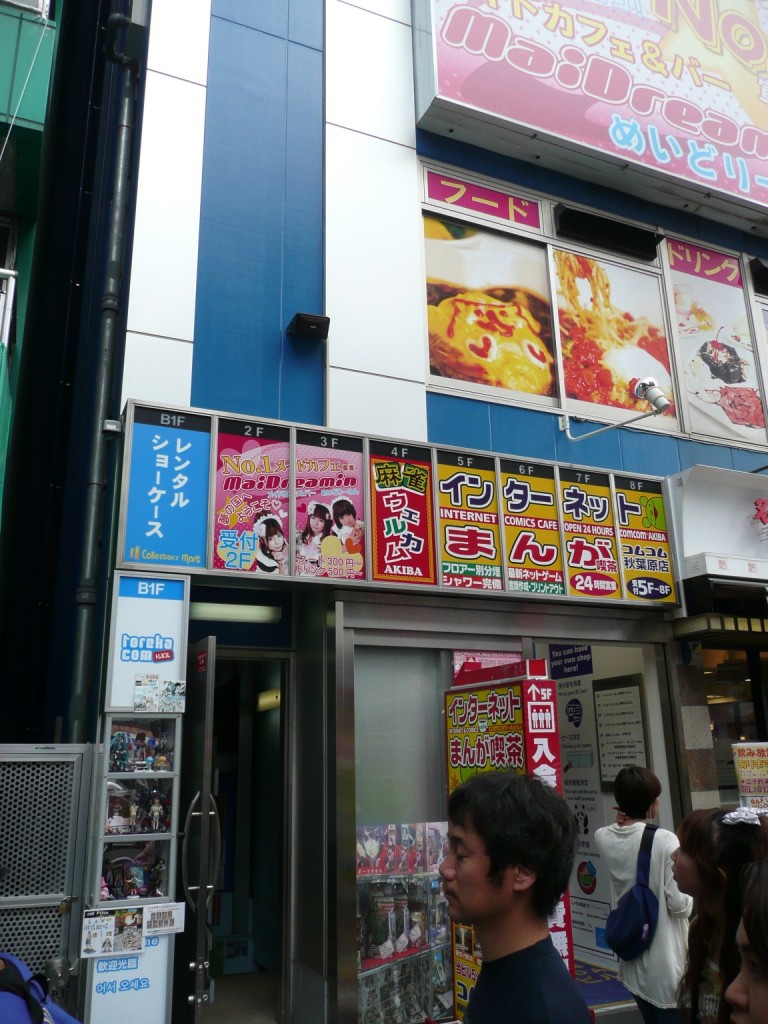 I hope we are going up to the fifth floor…